Uluwatu Temple is one of the most popular Bali Places of Interest to visit during the sunset time and this place is very crowded by tourist everyday. Balinese called this temple is Pura Luhur Uluwatu is one of six key temples believed to be Bali spiritual pillars. Is renowned for its magnificent location, perched on top of a steep cliff approximately 70 meters above sea level. This temple also shares the splendid sunset backdrops as that of Tanah Lot Temple, another important sea temple located in the island western shores. 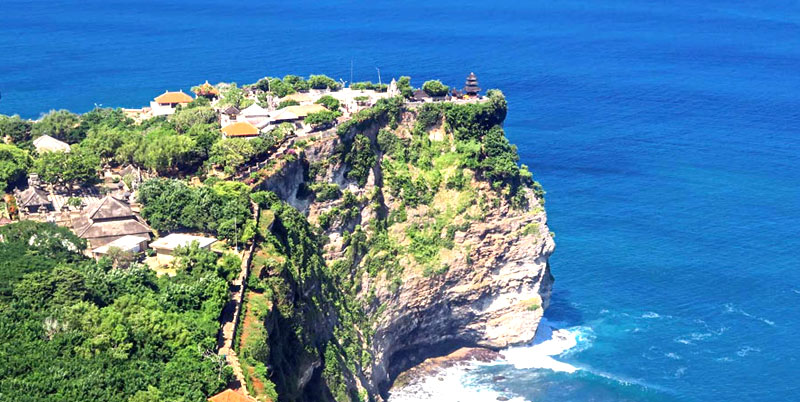 Uluwatu Temple is definitely one of the top places on the island to go to for sunset delights, with direct views overlooking the beautiful Indian Ocean and daily Kecak dance performances. Balinese architecture, traditionally designed gateways and ancient sculptures add to Uluwatu Temple appeal. Without a doubt, what makes Uluwatu Temple spectacular is its cliff top setting at the edge of a plateau 250 feet above the waves of the Indian Ocean.

Ulu means the top or the tip and watu means a stone or a rock in Balinese. Several archaeological remains found here prove the temple to be of megalithic origin, dating back to around the 10th century. There are two entrances to Uluwatu Temple, from the south and the north. A small forest lies at the front and hundreds of monkeys dwell here. They are believed to guard the temple from bad influences, the serpentine pathway to Uluwatu Temple is fortified by concrete walls on the cliff side.

It takes about an hour to get from one end to another as there are several fenced points along the way to stop. The views from the bottom of the water surging up against rocks and the ocean horizon are remarkable. The Balinese Hindus believe that the three divine powers of Brahma, Vishnu and Siva become one here. That belief results in making Uluwatu Temple a place of worship of Siva Rudra, the Balinese Hindu deity of all elements and aspects of life in the universe.

Uluwatu Temple is also dedicated to protect Bali from evil sea spirits. Inscriptions mention that Uluwatu Temple was instigated by Mpu Kunturan, a Majapahit monk who also participated in establishing several other important temples in Bali such as Pura Sakenan in Denpasar, about 1,000 years ago. A holy priest from eastern Java, Dhang Hyang Dwijendra, then chose Uluwatu Temple to be his spiritual journey final worshiping place. Balinese Hindu devotees believe that he reached the highest spiritual point of oneness with deities by a strike of lightning and completely disappeared.

Legend, however, says that Dhang Hyang Dwijendra (also frequently referred to by name as Danghyang Nirartha) was the architect of Uluwatu Temple and several other temples in Bali, Lombok, as well as Sumbawa. Until 1983, Uluwatu Temple was hardly accessible and a lightning strike in 1999 set some parts of the temple on fire. The temple has had some restorations since it was first built. Behind the main shrine in one of the courtyards of Uluwatu Temple lies a Brahmin statue facing the Indian Ocean, considered as a representation of Dhang Hyang Dwijendra.

The two entrances to the temple area are split gates with leaves and flowers carvings. In front of each of them are a couple of sculptures shaped like a human body with an elephant head. A heritage of the 10th century is the one piece winged stone gate to the inside courtyard of Uluwatu Temple. Winged gates are not commonly found on the island. An addition to Pura Uluwatu in the 16th century is Pura Dalem Jurit. There are three statues in it, one of them is of Brahma.

There are two stone troughs in the temple area. If both of them are joined, they create a sarcophagus (Megalithic coffin). Uluwatu Beach, below the cliff, is one of Bali best internationally known surfing spots. Every six months according to the Balinese 210 day Pawukon cycle, big temple anniversary celebrations are held at Uluwatu Temple. The temple keeper, the royal family of Jro Kuta from Denpasar, are patrons for the event.

Precautionary signs warn visitors of the monkeys grabbing attractive items such as sunglasses and cameras. However, they can be calmer when approached with peanuts or bananas, lending an opportunity to retake stolen possessions. There has not been any significant erosion on the shoreline underneath the temple towering cliff. Believers regard it as a manifestation of the divine power that protects Uluwatu Temple.

Public facilities are available, but not in the temple area. Unlike some other tourist destinations in Bali, Uluwatu Temple area has limited amounts of hassling vendors. Visitors must wear a sarong and a sash, as well as appropriate clothes common for temple visits. They can be hired here, the best time to visit is just before sunset. A Kecak dance is performed everyday at the adjacent cliff top stage at 18:00 to 19:00.

Visitors are charged a nominal fee. What makes it the most favorite venue to watch a Kecak dance is the sunset background of the performance. There is no public transportation to get here and going back in to town will be difficult without any prearranged ride or taxi. A guide is not necessary, though helpful. The service offered is hassle free at very minimum prices.