Ulun Danu Beratan Temple is one of the most popular Bali Places of Interest famous picturesque landmark and a significant temple complex located on the western side of the Beratan Lake in Bedugul, central Bali. The whole Bedugul area is actually a favorite cool upland weekend and holiday retreat for locals and island visitors alike from the southern and urban areas, as it is strategically located, connecting the island north and south. 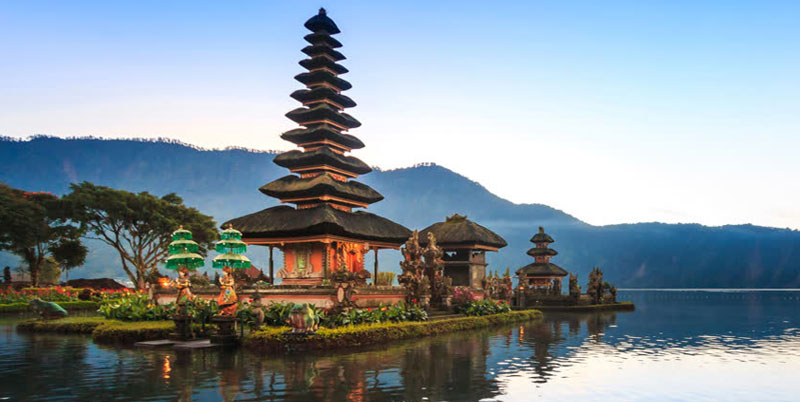 Ulun Danu Beratan Temple, literally the source temple of Lake Beratan, is easily the island most iconic sanctuary sharing the scenic qualities with the seaside temples of Uluwatu and Tanah Lot. The smooth reflective surface of the lake surrounding most of the temple base creates a unique floating impression, while the mountain range of the Bedugul region encircling the lake provides the temple with a scenic backdrop.

Ulun Danu Beratan Temple was built in the 17th century in worship of the main Hindu trinity, Brahma, Vishnu and Shiva, as well as the lake goddess, Dewi Danu. The sight and cool atmosphere of the Bali uplands have made the lake and this temple a favorite sightseeing and recreational spot as well as a frequently photographed site. The history of the Ulun Danu Beratan Temple can be traced back to the rise of the Mengwi kingdom.

The floating temple complex is comprised of four groups of shrines, including the prominent Lingga Petak shrine to its east. There are four gates facing each of the four points of the compass. The second group is located in the west and pays homage to another temple in the hill of Puncak Mangu and is regarded as the symbol of soil fertility. The puncak or hilltop of Mangu is northeast of Lake Beratan.

Entering Ulun Danu Beratan Temple gates, instantly noticeable are the typical Balinese architectural features and the tiered shrines. Inside the complex, the three main shrines are dedicated to the worship of god Vishnu which boasts 11 tiers, god Brahma with seven 7 tiers and Shiva with three tiers. As the temple complex occupies a rather low lying side of the lake, the floating effect is thus featured when the lake water levels rise.

This is the time for the most perfect photo opportunities. Besides a silent witness and historical site of the golden days of the Mengwi kingdom, this temple complex is also home to a megalithic artifact in the form of a sarcophagus and stone tablet. This has led to the assumption that it was a consecrated site before the Hindu temple was built.

Ulun Danu Beratan Temple anniversary ceremony or Piodalan takes place every Kliwon Julungwangi Tuesday on the Pawukon Balinese calendar cycle which occurs every 210 days. Also a grander Piodalan Agung takes place every 420 days. However, on any other regular day the serene lake views and cool uplands are an experience itself. Visits to the Ulun Danu Beratan Temple are subject to an entrance fee of IDR 15,000 for domestic tourists and IDR 30,000 for foreigners.

Those who want more than scenery may hire traditional jukung outriggers to tour the lake as well as motorized boats for a quicker ride. The other side of the Beratan Lake also offers various water sports such as parasailing and jet skis. Close to the temple complex visitors can hire fishing gear and bait to pass the time away on the lakeside. The Eka Karya Botanical Gardens is also a highlight of the Bedugul region, with access located nearby.