LEGONG DANCE IS ONE OF THE MOST POPULAR BALINESE DANCE THAT CHARACTERIZED BY THE INTRICATE FINGER MOVEMENTS, COMPLICATED STEPS, EXPRESSIVE GESTURES AND FACIAL EXPRESSIONS

Legong Dance dancer is girls from the age of five aspire to be selected to represent the community as Legong dancers. Connoisseurs hold the dance in highest esteem and spend hours discussing the merits of various Legong groups. The most popular of Legongs is the Legong Kraton, Legong of the palace. Formerly, the dance was patronized by local rajas and held in a puri, residence of the royal family of the village. 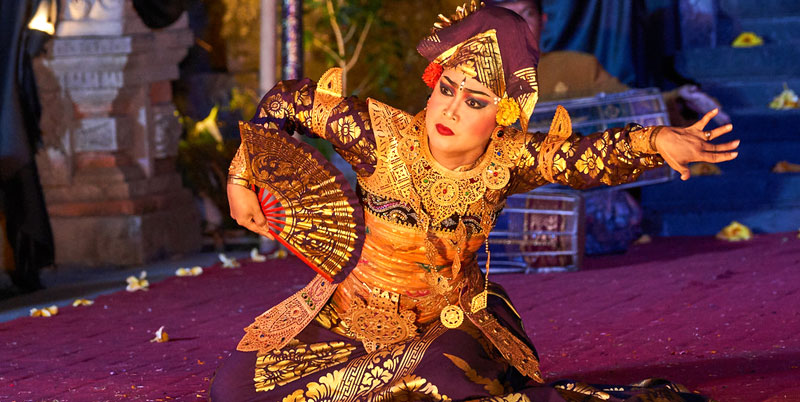 Dancers were recruited from the aptest and prettiest children. Today, the trained dancers are still very young, a girl of fourteen approaches the age of retirement as a Legong performer. The highly stylized Legong Kraton enacts a drama of a most purified and abstract kind. The story is performed by three dancers : the condong, a female attendant of the court and two identically dressed legongs (dancers), who adopt the roles of royal persons.

Originally, a storyteller sat with the orchestra and chanted the narrative but even this has been refined away in many Legongs. Only the suggestive themes of the magnificent gamelan gong (the full Balinese orchestra) and the minds of the audience conjure up imaginary changes of scene in the underlying play of Legong Kraton. The story derives from the history of East Java in the 12th and 13th centuries when on a journey the King of Lasem finds the maiden Rangkesari lost in the forest.

He takes her home and locks her in a house of stone. Rangkesari's brother, the Prince of Daha, learns of her captivity and threatens war unless she is set free. Rangkesari begs her captor to avoid war by giving her liberty, but the king prefers to fight. On his way to battle, he is met by a bird of ill omen that predicts his death. In the fight that ensues he is killed. The dance dramatizes the farewells of the King of Laserm as he departs for the battlefield and his ominous encounter with the bird.

It opens with an introductory solo by the condong. She moves with infinite suppleness, dipping to the ground and rising in one unbroken motion, her torso poised in an arch with elbows and head held high, while fingers dance circles around her wrists. Slowly, her eyes focus on two fans laid before her and, taking them, she turns to meet the arrival of the Legongs. The tiny dancers glitter and dazzle. Bound from head to foot in gold brocade, it is a wonder the legongs can move with such fervent agitation.

Yet, the tight composure of the body, balanced by dynamic directive gestures-the flash of an eye, the tremble of two fingers blend in unerring precision. After as hort dance, the condong retires, leaving the legongs to pantomime the story within the dance. Like a controlled line of an exquisite drawl ing, the dancers flowfrom one identity into the next without disrupting the harmony of the dance.

They may enter as the double image one character, their movements marked tight synchronization and rhythmical verve Then they may split, each enacting a separate role, and come together in complementary halves to form a unified pattern, as in the plan ful love scene in which they rub noses The King of Lasem bids farewell to his queen and takes leave of Rangkesari. She repels his advances by beating him with he fan and departs in anger.

lt is then the condong reappears as a bird with wild eyes fixed upon the king. Beating its golden wings to a strange flutter of cymbals, it attacks the king in a vain attempt to dissuade him from war. The ancient narrative relates : a black bird came flying out of the northeast and swooped down upor the king, who saw it and said, Raven, hoi come you to swoop down on me. In spite all, 1 shall go out and fight.

This 1 shall do, oh raven. With the king's decision understood the dance may end or the other legong may return on stage as his prime minister and shimmering unison, they whirl the final step is : war.