Kehen Temple is one of the most popular Bali Places of Interest, its enshrines three gods : Brahma, Vishnu and Shiva which is believed to have been built even before construction of the town and now lies at the outskirts of the city. The town itself is dominated by the royal houses spread around its main square. Kehen Temple is the royal ancestral temple of Bangli Kingdom, one of the eight most important royal houses on Bali. Literally meaning the temple of the hearth or the household, this refers to Hyang Api or the God of Fire, symbol of the Hindu god Brahma. 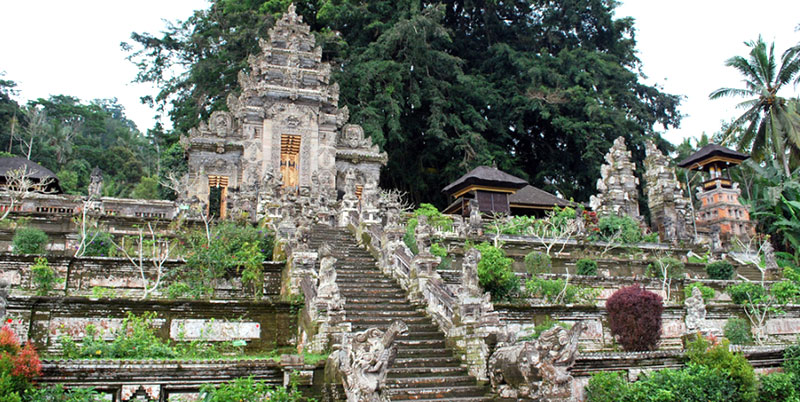 Here worshippers burn offerings on a small hearth, Kehen Temple is one of the most beautiful temples on Bali standing above a steep slope. To reach the entrance gate one must climb a stone staircase with 38 steps guarded by stone statues on either side, all the way up to the gate. Unlike other Balinese temples where the entrance is a split gate, not so at Pura Kehen, which has a large triangular shaped gate similar to that of a mountain, where on Java, such shape is called gunungan (gunung meaning mountain).

Passing the gate, a large, old banyan tree with wide protecting foliage and hanging roots dominates the outer courtyard. A kulkul or bamboo drum hangs from its branches and among its roots is a stone altar for offerings. Like Besakih Temple, Kehen Temple is built on several levels. Here are eight stepped terraces, where the top level is the most sacred sanctuary.

There are no less than 43 altars on the various levels of Kehen with the most prominent covered with a tower that has 11 thatched roofs or meru, dedicated to Sang Hyang Api. While at the northeastern corner there is a huge three-compartment stone throne, carved with intricate reliefs. During the temple anniversary, called odalan, devotees from around Bali come to pray in Kehen Temple.

Bangli is also known for its Arts Center, or the Sasana Budaya, where regular kecak or wayang performances are held. Typical to Bangli is the Baris dance, or the dance of the warriors. Although also known in other regions, Bangli has developed its special Baris choreography, known as the Baris Jojor (8 men carrying spears), the Baris Presi or Tamiang (8 men in a circle carrying leather shields) and Baris Dadap, all of which are performed especially during odalan.