Goa Gajah Temple is one of the most popular Bali Places of Interest, its an archaeological site of significant historical value that makes it a special place to visit. Located on the cool western edge of Bedulu Village, six kilometers out of central Ubud, you do not need more than an hour to descend to its relic filled courtyard and view the rock-wall carvings, a central meditational cave, bathing pools and fountains. The temple name is slightly misleading, lending the impression that its a gigantic dwelling full of elephants. 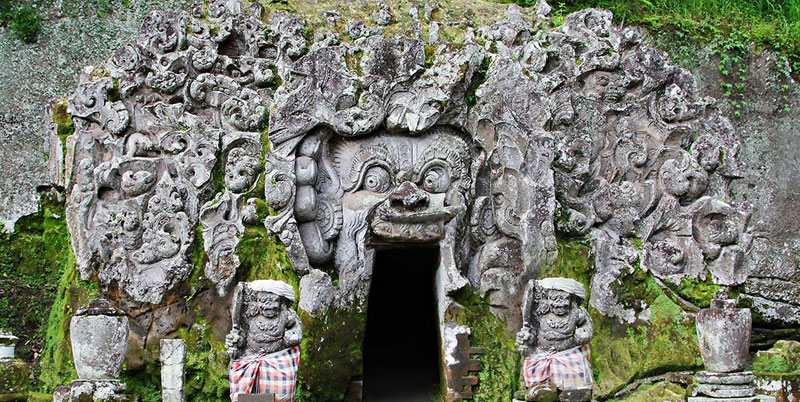 Goa Gajah Temple dates back to the 11th century, built as a spiritual place for meditation. The main grounds are down a flight of steps from the roadside and parking area, which is lined with various art and souvenir shops and refreshment kiosks. Upon reaching the base you will come across a large wantilan or meeting hall and an assortment of large old stone carvings, some restored to their former full glory.

The pool, excavated in 1954, features five out of supposedly seven statues depicting Hindu angels holding vases that act as waterspouts. Various structures reveal Hindu influences dating back to the 10th century, and some relics feature elements of Buddhism dating even earlier to the 8th century. The cave is shallow, inside are three stone idols each wrapped in red, yellow and black cloths. Black soot lines the caves walls as result from the current-day incense burning.

Several indentations show where meditating priests once sat. The northern side of the complex is dominantly Buddhist while south across the river its mostly Shivaite. At the southern end are beautiful rice fields and small streams that lead to the Petanu River - another natural site entwined in local legends. Goa Gajah Temple was built on a hillside and as two small streams met here forming a campuhan or river junction, the site was considered sacred and was built for hermetic meditation and prayers.

Even though the sites name translates into Elephant Cave, you will not find any pachyderms here. Various theories suggest the origin of the name, such as back in time the Petanu River was originally called Lwa Gajah, meaning the River Gajah, before it came to be called Petanu River. Other sources state that the Gajah or elephant aspect came from the stone figure inside the cave depicting the Hindu lord Ganesh, who is characterized by an elephants head.

Ancient inscriptions also allude to the name Antakunjarapada, which roughly translates to elephants border. The caves entrance shows a menacing giant face with its wide open mouth as the door. Various motifs depicting the forest and animals are carved out of the outer rock face, the giant face was considered to be that of an elephants. The complex is open daily 08.00 AM - 16.00 PM, as with any temple in Bali, women during their periods are forbidden entrance and wearing a sarong and waist sash is a must.

These are available for rent at the entrance. Goa Gajah Temple celebrates its piodalan temple anniversary on an Anggara Kasih Prangbakat Tuesday on the Balinese 210-day Pawukon calendar, which coincides with June 25, 2013. Entry tickets are 15,000 rupiah for adults and 7,500 for children.