Batuan Temple is one of the most popular Bali Places of Interest, local Balinese Hindu temple looked after by the local resident of Batuan countryside. The temple is designed very beautiful with full of Balinese ornaments and the roof temple building is made from the fiber of chromatic black palm tree. For over a thousand years, Batuan has been a village of artists and craftsmen, old legends and mysterious tales. 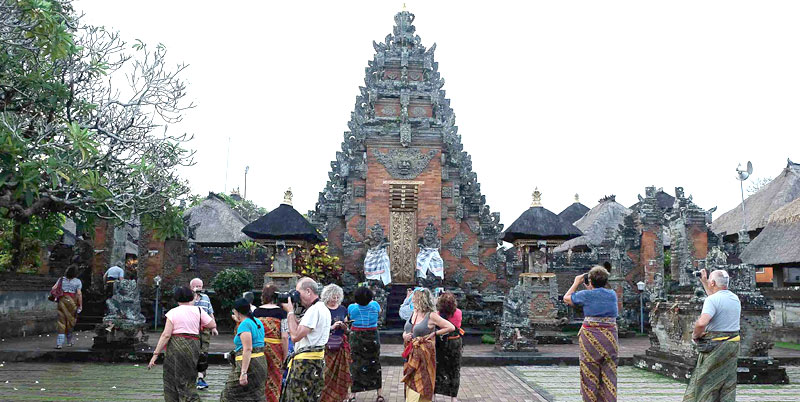 Batuan Temple were founded in the year 944 isaka (1020 AD). Nearly 1000 years old, the temple is a Puseh Temple category based on the concept of Tri Kahyangan or Tri Murti taught by Mpu Kuturan around the 10th century to the Balinese Hindu community at the time.

History of Batuan Temple :
The name Batuan or Baturan mentioned here prompts villagers to joke about being tough as stone or eating rocks as batu means stone in Balinese. But it likely refers to an ancient megalithic tradition in which standing stones served as meeting places and ceremonial sites for the worship of ancestral spirits. Because Batuan became a center from which Buddhist priests and brahmans spread to the main court centers of south Bali, the village has an unusual preponderance of brahman.

Local people are very concern about the care and preservation of the temple architecture and its environment. Not all existing buildings were old buildings here, there are some that have undergone renovation, renewal, and change from 10th century to 13th century and also 18th century AD. The structure and foundation of this temple are very tough and strong. It has the original Balinese ornament that beautifully craved on every building at this temple area. Some ornaments are reflection of The Ramayana Epic story and every holy building has different function philosophically.

Batuan Temple Area Consist Of :
At Batuan Temple parking area, there is standing an ancient building called Wantilan, this place use as a meeting hall and to practice any kind of Balinese dances as Gambuh Dance, Pendet Dance, etc. Before you enter the temple there is some local people at Wantilan will lend you kamben (a traditional Balinese costume). It is a must for you to wear Balinese kamben to show your respect and honor about the holiness of Puseh Temple of Batuan Village.

It's all free, you won't be charged for entrance. However the local people expect every tourist who visited to this temple can donate in any amount of money to support the maintenance of the temple. There is provided a simple donation box. Every donation that you give should be based on a sense of sincerity, where Balinese people know it is called medana punia. In the middle yard of temple there is a long building / bale called the Bale Agung and Bale Kulkul (a gong mad by wood or bamboo).

In this yard there is also a high entrance Balinese Gate called the Kori Agung, which is flanked by the many guardian statues shaped the giant sculpture. The function of Kori Agung is the door where the exit and entry for the gods symbolized by a small statue called Pratima. Next to the Kori Agung there are two small doors as a place of exit and entry of people into the temple's main yard.

In the main yard of Batuan Temple there are some three story Meru and Bale Pengiyasan as a symbol of the temple of Besakih, there is also a building called Padmasana as a place of worship to Sang Hyang Widhi, the only one Bali Hindu’s God Batuan Temple is not only emitting a high spiritual vibration, but also representing the historical values. You can look inside there are many stunning ancient relics from prehistoric times.

How the influence of Hindu culture in Bali made of natural stones in this temple become a place of worship, both to their ancestors and worshiped Hindu Deities. You will amaze in finding some ancient and unique statues there. Based on a number of statues found in this Puseh Temple, it can be grouped into several types. They are Dwarapala Statue, Embodiment Statue, Animal Statues, The Status Figure of Holding the Chicken, Phallus, Demons (Time), and many more.