Badung Traditional Market is one of the most popular Bali Places of Interest as a center of city's economy and the largest market in Denpasar City. It is located on Gajah Mada Street, a main road as center shops in Bali's province before it develop like today. Badung Market is set apposite with Pura Desa (Desa temple), one of the biggest Hindu temples in Denpasar which is formerly not grand like nowadays because it has developed and renovated for several times to meet the city development. 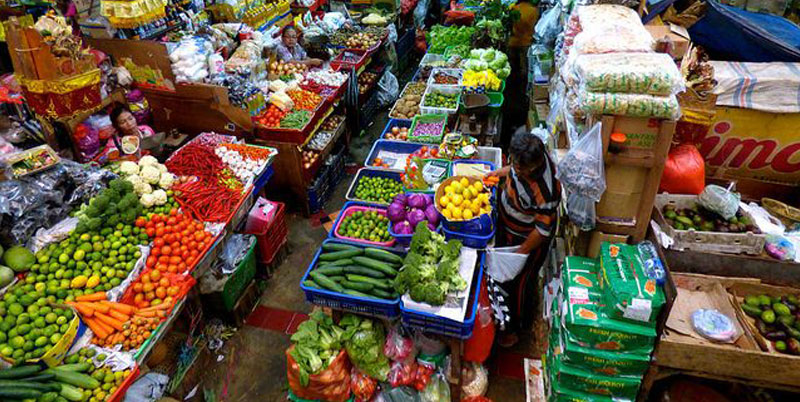 When we trace back, the development of Badung Traditional Market can not be separated from the existence of a traditional market across of Badung River called by Kumbasari Market. It is because the local people come to Badung Market for purchasing the daily needs not feel completely if they do not come and shop at Kumbasari Market, especially when they purchase the ceremony materials.

Between Badung and Kumbasari Market have specialization of goods sold where Badung market sell the daily consumption goods and other materials which the prices are relatively cheaper compared with the materials sold at the shops in Gajah Mada Street. Meanwhile, the Kumbasari Market is formerly called by Payuk Market that sold earthenware with multifarious shapes and sizes like pot, ground plate, bucket made from land, water jug and other kitchenware made from land.

The change shape of Badung Traditional Market from the original to the update form was unveiled on 24 April 1984 by Bali's governor Prof.Dr.Ida Bagus Mantra. After the fire accident, it has been renovated in year 2000 when Mr. Made Berata was been a Bali's Governor. The market size is 14.544 m2 with parking area about 9064 m2 has been built with 4 storey occupied by 1834 merchants in shop, 1363 merchants occupying corridors and 179 merchants occupying terrace.

The buyers who come to this market are not come from the town only but there are also come from behind of city. When having the big holiday like Galungan, Kuningan and Nyepi Day, it is chockablock full by visitors. Badung Traditional Market is opened from 05.00 am and closed at 05.00 pm. Then it is changed by the afternoon market opened from 05.00 pm until the next morning at 05.00 am.

Meanwhile the Sengol Market at Kumbasari Market is opened at 02.00 pm and closed at 11.30 pm. Name of Sengol Market is taken from the unique of the buyer movements in this market where they touched each other in the ass when they go for shopping because of chockablock full by the visitors. There are several cuisines from Bali, Java and Chinese are sold at this market as well as the cheaper clothes.